Electric Man 2
You need to have Flash enabled on your browser.
Flash is a multimedia platform designed to display animations, browser games, videos and rich internet applications. 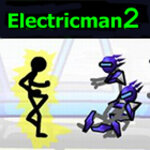 In Electric Man 2: The Tournament of Voltagen, it's time to show that you're the best fighter! With your amazing punches, kicks, and other tricks, none can stand in your way. Are you ready to defeat each one of your opponents, and climb to the top of the tournament to become the champion?

Your opponents are ready, so you should be too! The objective of this game is to complete each level by defeating your opponents without dying. Your character is skilled in martial arts. Start the game from the main menu, and get ready to attack waves of enemies. Give your character a name, choose an aura color for them, and lastly, pick a difficulty level. The first level is tutorial, in which you learn about the basic controls. After you complete it, you can start the actual tournament. After completing all four matches, a new round will be unlocked. You can see your health bar and the special attack battery meter in the top left corner of the screen. Good luck!

Do you like fighting? Then be sure to check our other popular game, Stickman Fighter: Epic Battles. Have fun!

This game is developed by DX Interactive.