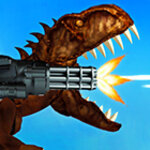 Mexico Rex is more powerful than it was in L.A! After the disaster this big dinosaur caused, they captured him in a big prison. Everyone thought he died in there, but a crazy scientist brought him into life again. Now he continues to terrorize Mexico by eating the police and civilians. Furthermore, he even eats the biggest cars, along with everything he sees. Take his place and pass the levels if you can!

Mexico is in great danger because of this creepy monster! But feeling the power of the Rex is a whole another satisfaction. In this fun action game, you will take place of the rex and start to destroy the city by eating everything on your way. Your objective is to complete the eaten number, situated at the top of the game screen, and reach the finish line safe and sound. The crazy scientist injected a weapon into rex's throat. So, you can collect the bullet boxes and shoot the people on your way. Use the WASD keys to move the dinosaur around. He can jump and crouch if you need him to. To shoot, hold clicking the left button of the mouse. And to bite, a single left-click is enough. Pass the levels by reaching the target number and show the strength of your jaw now!

If you liked this adventure and want to try another 3D shooting game, then be sure to check PUBG Pixel by clicking here.

Use the WASD keys to go forward or back, jump and crouch. Use the left-click to eat and hold clicking to shoot.