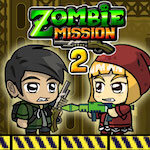 In Zombie Mission 2, something the stench of the undead fills the air, and there aren't many survivors left from their attack. Take control of a brave duo, and show the undead that they shouldn't have left their graves. With your guns and sharp with, no walking dead could stand a chance against you!

There are people to be saved and zombies to be slain, so be quick. You can play the game solo or with a friend. Your objective is to clear every level without dying. To complete a level, you should collect all the disks and save all the remaining survivors. This will reveal the exit gate. Each level is filled with traps and enemies, so watch out! You can collect medicine to heal your hurt characters. If one of them dies, you'll lose the level and have to start again. Good luck!

Be sure to check the other title in the series Zombie Mission 4, by clicking here. Enjoy!